The Greatest of All Protestant Heresies?


This summer I have been living with a couple outside of DC and every Friday I have been going with the husband to his men's Bible Study that meets weekly at Panera Bread for breakfast, fellowship and devotion. They have been going through a book called "In Christ Alone: Living the Gospel Centered Life" by  Sinclair Ferguson, a Scottish professor of systematic theology at Redeemer Seminary in Dallas, Texas. He is a reformed/Calvinist Christian, which as any of you who know me well enough know, I strongly am against that deceptive teaching. Regardless of that, in a chapter of Dr Ferguson's book, he writes about the assurance of salvation. This is something that is totally backed up by scripture that Catholic teachings are against. I have also met many reformed/Calvinists who are against it. Heck, the entire reformed/Calvinist teaching of salvation is completely contrary to having and knowing assurance of salvation. However, I digress... Despite Dr Ferguson's un-biblical beliefs, his writing comes across as very biblical and is spot on. I guess that goes to show that the Lord can work through and speak through even the most flawed teachings and theologies. Anywho, I wanted to share this chapter with y'all.

“The Greatest of All Protestant Heresies”?

"Let us begin with a church history exam question. Cardinal Robert Bellarmine (1542–1621) was a figure not to be taken lightly. He was Pope Clement VIII’s personal theologian and one of the most able figures in the Counter-Reformation movement within sixteenth-century Roman Catholicism. On one occasion, he wrote: “The greatest of all Protestant heresies is _______ .” Complete, explain, and discuss Bellarmine’s statement.

How would you answer? What is the greatest of all Protestant heresies? Perhaps justification by faith? Perhaps Scripture alone, or one of the other Reformation watchwords?

Those answers make logical sense. But none of them completes Bellarmine’s sentence. What he wrote was: “The greatest of all Protestant heresies is assurance.”

No wonder Bellarmine thought full, free, unfettered grace was dangerous! No wonder the Reformers loved the letter to the Hebrews!

This is why, as the author of Hebrews pauses for breath at the climax of his exposition of Christ’s work (Heb. 10:18), he continues his argument with a Paul-like “therefore” (Heb. 10:19). He then urges us to “draw near … in full assurance of faith” (Heb. 10:22). We do not need to re-read the whole letter to see the logical power of his “therefore.” Christ is our High Priest; our hearts have been sprinkled clean from an evil conscience just as our bodies have been washed with pure water (v.22).

Christ has once-for-all become the sacrifice for our sins, and has been raised and vindicated in the power of an indestructible life as our representative priest. By faith in Him, we are as righteous before the throne of God as He is righteous. For we are justified in His righteousness, His justification alone is ours! And we can no more lose this justification than He can fall from heaven. Thus our justification does not need to be completed any more than does Christ’s!

With this in view, the author says, “by one offering He has perfected for all time those who come to God by him” (Heb. 10:14). The reason we can stand before God in full assurance is because we now experience our “hearts sprinkled clean from an evil conscience and … bodies washed with pure water” (Heb. 10:22).

“Ah,” retorted Cardinal Bellarmine’s Rome, “teach this and those who believe it will live in license and antinomianism.” But listen instead to the logic of Hebrews. Enjoying this assurance leads to four things: First, an unwavering faithfulness to our confession of faith in Jesus Christ alone as our hope (v.23); second, a careful consideration of how we can encourage each other to “love and good works” (v.24); third, an ongoing communion with other Christians in worship and every aspect of our fellowship (v.25a); fourth, a life in which we exhort one another to keep looking to Christ and to be faithful to him, as the time of his return draws ever nearer (25b).

It is the good tree that produces good fruit, not the other way round. We are not saved by works; we are saved for works. In fact we are God’s workmanship at work (Eph. 2:9–10)! Thus, rather than lead to a life of moral and spiritual indifference, the once-for-all work of Jesus Christ and the full-assurance faith it produces, provides believers with the most powerful impetus to live for God’s glory and pleasure. Furthermore, this full assurance is rooted in the fact that God Himself has done all this for us. He has revealed His heart to us in Christ. The Father does not require the death of Christ to persuade Him to love us. Christ died because the Father loves us (John 3:16). He does not lurk behind His Son with sinister intent wishing He could do us ill — were it not for the sacrifice his Son had made! No, a thousand times no! — the Father Himself loves us in the love of the Son and the love of the Spirit.

Those who enjoy such assurance do not go to the saints or to Mary. Those who look only to Jesus need look nowhere else. In Him we enjoy full assurance of salvation. The greatest of all heresies? If heresy, let me enjoy this most blessed of “heresies”! For it is God’s own truth and grace!"
Posted by Chaosman92 at 2:44 PM No comments:

Last Tuesday, conservative college students interning in Washington DC attended the first annual Susan B. Anthony List Intern Strategy Summit. The event was hosted at The Heritage Foundation and was put on by SBA List, The Heritage Foundation, and Alliance Defending Freedom. There were 4 different discussion panels that the speakers sat on, covering topics. The first panel was called “Standing for Truth: The Battle to Preserve Religious Liberties.” Speakers talked about the growing attacks on religious liberties in America. Penny Nance from Concerned Women for America and Sarah Torres of The Heritage Foundation discussed the social aspects and attitudes of the Hobby Lobby and Conestoga Wood cases, the Benham Brothers controversy, as well as the supposed “War on Women” that the left keeps talking about.  “There’s an ideological line that women are supposed to tow,” said Nance, “and they [liberals] hate it if you think for yourself.” Jordan Lorence of ADF spoke on those issues from a legal perspective and gave helpful legal insight about the establishment clause in the First Amendment. “I’m going to tell you something that most people do not know. Only the Federal Government can violate the establishment clause. Accommodating religious people is not the government endorsing religion,” said Lorence.

On another panel entitled “Taking Life on Offense : A Time for Heroes”, sat three women considered heroes by many conservatives , Kristan Hawkins of Students For Life of America, Marjorie Dannenfelser of SBA List, and Jeanneane Maxon of Americans United for Life. These women discussed the issue of abortion and how pro-life students can make a difference in the world.  “You’re not on the losing side! We have a chance to win!” Hawkins exclaimed. “This is the greatest human rights struggle our world has ever known and even though you might not be a hard core activist, there is a place for you in the pro-life movement.” Dannenfelser, coming from a political side, encouraged the interns to get out of their comfort zones.  “You need to think of yourselves as someone who will not take a comfy seat in this movement.” She warned, “You may have to go in and do things that you may not feel comfortable doing- like running for office - If you are not going to do that, you need to get involved in the party that most needs your strength- that is the Republican Party”.

The most anticipated speaker of the Summit was Princeton University McCormick Professor of Jurisprudence, Robert P. George. Professor George was interviewed by Marjorie Dannenfelser on how to prepare intellectually for standing up for beliefs “There is a cost of discipleship and the price is getting higher and higher,” George explained, “You’re going to be asked, if you stand up for what is right, to put things at risk,”

Other speakers at the Summit included Maggie Gallagher and Frank Cannon of the American Principles Project, Brian Brown of Nation Organization  for Marriage, Ryan Anderson of  The Heritage Foundation, with Kate Bryan of APP and Mary Powers of SBA List moderating.

The interns that attended the Summit left feeling united and encouraged to stand for Life, Religious Liberty, and Marriage. 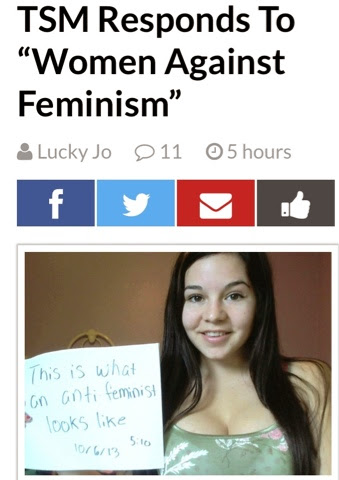 http://totalsororitymove.com/tsm-responds-to-women-against-feminism/
Many of you have probably seen this making rounds on Facebook and Twitter. It's an article attacking girls who are a opposed to the "new-wave" sex-fanatic Feminism.
I agree that true feminism is about equality, but this author has it all wrong. What these girls are protesting against is the modern "new wave" feminism that is taking over academia. I have friends who have encountered these on their campuses. Women who host masturbation workshops, sex workshops, sell sex toys on campus, post child porn around campuses, bring porn stars to speak at campuses, who believe that motherhood is equal to being a slave, that women should be allowed to kill their children if they are a burden to them, and much more.
My friend recently was honored by my university to attend a national women's conference in DC and she said that most of what was discussed was this crazy disgusting branch of so-called feminism.  These groups of these people claim you can't be a feminist of you don't support those things.
THAT is what these girls are referring to.
This is my friend's blog telling what was being taught as "feminism" on the national academic level. As you can see, none of the true attributes about feminism were talked about. This is the very thing that these girls were talking about
http://college.studentsforlife.org/2014/06/24/put-900-pro-life-feminists-in-a-room/
I recently went to a Feminists For Life seminar of a group of women who stay true to the true meaning of feminism: Non-Violence, non discrimination, and equality for all human beings. That's what the original and real feminist foremothers like Susan B Anthony, Phyllis Schlafly, Dr Elizabeth Blackwell, Dr Charlotte Lozier, Elizabeth Stanton, Alice Paul, and many others all believed and fought for.
I believe whole heartedly in these true aspects of feminism that these amazing women believed in and fought for. Not what is being taught as feminism now adays
Posted by Chaosman92 at 6:03 PM No comments: