The Sound of Silence

Yesterday I read an article written by my friend Dr Mike Adams on Townhall.com. The article was titled "The Campus Crusade for  Comfort". In the article! Adams criticizes the well known and respected Christian campus organization, Campus Crusade For Christ, recently renamed Cru. What was the conservative professor's criticism? Silence and censorship on the abortion topic. The following is an exert from Adam's article that sums up the situation:

So why are campus ministries largely silent on such a profound moral issue? Recently, I had a chance to ask a Campus Crusade director that very question. His response was that Campus Crusade is not “a politically-based organization.” That explanation is inadequate. In fact, it is demonstrably false.
Several years ago, a good friend of mine named Dave Sterrett gave a pro-life speech to a Campus Crusade chapter at a state university in North Texas. He was invited to speak by a student. During the middle of his speech, he was arguing that the unborn are fully human and have souls by quoting from the Gospel of Luke. His talk was clearly Biblical and not political in nature.
Nonetheless, when the Campus Crusade director arrived, he rudely shut the speech down.
The Campus Crusade director told Dave to come out in the hall after he shut down his talk. The Crusade leader then began to yell at Dave and told him, "I don't know what your deal is talking about this issue. Get your books and get out of here." He went even further calling the headquarters of Crusade, which then demanded an apology from Sterrett.
Shortly after I wrote about the incident, several members of Campus Crusade contacted me - but not to apologize for their mistreatment of Dave. They emailed to admonish me for writing about the incident – even though I did not call out the university or the chapter director by name. The fallout from the incident was revealing. It shows how far some campus ministries will go to avoid controversy – and that they often consider themselves to be above reproach.
The original incident was also revealing. The censored speech was not political so the problem cannot be that Campus Crusade is not a “politically-based” organization. The speech was morally and Biblically based. Does the rejection of the speech mean that Campus Crusade is not a “morally-based” organization? Or does it mean they are not a “Biblically-based” organization?
Of course it doesn’t. The incident merely shows that Campus Crusade has become a “comfort-based” organization. In other words, an over-riding priority is avoiding topics that might make people feel uncomfortable.
*The full article can be found here: http://townhall.com/columnists/mikeadams/2014/10/01/the-campus-crusade-for-comfort-n1899000/page/full

I know and have been taught/ mentored by both Adams and Sterrett. Both are amazing Christian men who, like me, feel called to stand up against abortion. After reading this article, I posted it on my Facebook page where it was received well by likes at first. Dr Robert P. George, McCormick Professor of Jurisprudence at Princeton University who is a devout Catholic and is a very well respected voice in the prolife movement commented saying, "And first they came for the..." A reference to Nazi Germany that I will address later. I was pleased to see him, being a well respected voice in the prolife movement that I had the pleasure of meeting this summer, comment in agreement with what I said. Then, as expected, the criticism came. A guy who was in one of my old campus ministry groups commented criticizing me for sharing it and for agreeing with Adams and Sterrett. This is what they said:
"I think you should be careful here. First off, while he mentions the website of the whole organization, the "bad situation" happened at only one location and we only got one side of the story.I would bet that the majority of Campus Crusade ministers are anti abortion and do address it. I hold a ministry position and speak publicly (though small segments of the public) very often. At times, the text I'm teaching brings up abortion. I discuss it as a moral issue just like anything else. I don't however, make it a focus of my ministry. This doesn't mean I'm OK with abortion, or think its insignificant. It simply means that I don't believe abortion is the primary issue of my ministry."

Well, it seems as though he completely missed the point of the article. It was, in no way saying that Christian organizations and churches should make the prolife issue the focus of their ministry. That would be crazy. Cru's mission is obviously sharing the gospel of Christ with people. That's what they are called to do. Other ministries focus on different aspects and share the gospel while doing so. For instance, the pregnancy center I volunteer with, it is a Christian ministry whose primary focus is to help women in crisis pregnancy situations. That's their mission. The show the love of Christ by serving and helping the women there, and after building a relationship with the women if the opportunity is there, they share the gospel with them. Other ministries have a primary focus of feeding homeless, helping victims of natural disasters, providing places for orphans to live, providing adoptions, ect... That's the whole point of us being the hands and feet of Christ.
But I digress. The following is the rather lengthy response I gave to him.
—
First off, it mentions members from several university chapters who contacted Adams and Sterrett that hold the stance that abortion is "too political" and the headquarters of Cru, the big wigs of the organization, contacted Dave and criticized him for speaking about abortion and asked him to apologize. Also varying members of Cru attacked Adams and Sterrett online. All that goes to show that this wasn't an isolated incident at one chapter.

Second, neither I nor  Dr Adams were referring to every single Cru chapter. I'm sure there are probably chapter leaders who are prolife and speak about the issue. But when several chapters and members across the country AND the umbrella organization attacks and demands an apology that is saying something. Just like with the United Methodist Church, they publicly state on their website and in their doctrine that they are pro-abortion-choice. I've called them out and so has Adams. Now, that doesn't mean every pastor is for abortion, I'm positive there are many UMC pastors and members who are prolife. But that doesn't make the organization as a whole prolife. It clearly states that it isn't.

Third, yes, a church or Christian organization like Cru's primary goal is to share the gospel. And they do great at that and many have come to faith in Christ through them. But when the church becomes silent on huge issues like this that scripture says we should speak up about, that's an issue.

Many churches saw the holocaust and everything the Nazis did to the Jews as political and thought that the church shouldn't get dragged into that because it "didn't involve" them. There were churches in Germany that were near train tracks and trainloads of Jews on their way to concentration camps often rolled by. The Christians in the church said they could hear the Jews' cries for help and to avoid being disturbed by the cries they would sing their hymns extra loud to block out the noise. A member of one of those churches said a few years ago that he is still haunted by them doing that and doing nothing to help them, and he said that he sees the same thing happening in America today with abortion. Christians and churches remain silent on the issue because it is "too political". We look in hindsight at these German Christians with disgust and ask "why?".

Cru wishes to be silent like the German churches, but through this incident and their stance from the national HQ to my friend Dave, they have broken that silence, in a manner. They are saying that they will not talk about that issue. They are breaking silence to reaffirm their silence on the issue.

Although some Christian organizations and churches do speak up against abortion, there are many that do not. Those who do not speak up against it are just as bad as those churches in Germany who stayed silent and did nothing. Which is worse? you might ask. In Germany the churches stayed silent while 6 Million innocent Jews were led to the slaughter, but in America, churches stay silent when 56 Million innocent babies are led to the slaughter. The death toll from abortion in America is 9 TIMES that which were killed in  the holocaust in Germany!

Silence speaks louder than words. The silence of the church on this issue reminds me of a set of lyrics from an old song by Simon and Garfunkle: "Fools," said I, "you do not know: Silence like a cancer grows."

As i said, abortion is not the primary issue of many ministries, and rightfully so, but at least some do mention it from time to time. Just like we mention other evils of our day. We all have different callings, but we should never be hesitant to speak up for what is right or wrong in the eyes of The Lord. He instructs us to speak up about these things. Everyone is called to do something for The Lord. Your gifts and calling are different than mine. Do what you are called to do, and speak on the issues when you can, but never stay silent when faced with the issues head-on. As for me, The Lord has put before me two great objects: the abolition of abortion and the sharing of his Saving Grace. 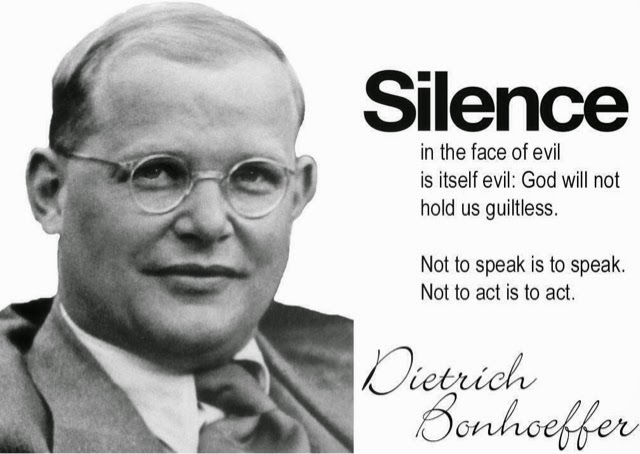