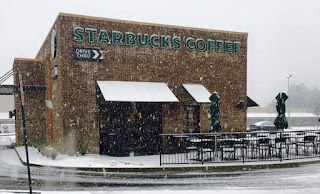 As those of you who know me, or follow this blog, know, I’ve been looking for a job since I graduated last May. I've been blessed to work part-time for a local company that pays fairly well, but I am still looking for a full time job that is in line with my major and my skills.

I've heard many people in my position complain and worry about finding a job, but I am not doing that. I am not worried. I know that the Lord has a job out there that is perfect for me and he is preparing me for it, and it for me. The thing that gets me is that it is taking a long time. I am not the most patient person, and God knows this, thus why He is teaching me a lesson of patience these past 8 months. I’m not worried about finding a job, I'm just tired of waiting. But ultimately, I know that His timing is perfect.

The main coffee shop I go to is Starbucks, yes, I know, cliché as all get out, but whatever. Being a frequent customer at this place, I have gotten to know some of the baristas and even more of the other regulars. Its a bit like the old TV show Cheers.

In Starbucks there is my friend Pierre, who is very smart and is always reading about some old dead white British Christian or Theologian. You also have Ozzy, who is a man in his early 80's who was born in Puerto Rico but grew up in the Bronx who loves to talk about the Lord. I always smile when I see his truck in the parking lot, which has a large sticker on the tailgate with a bible verse on it. In the evenings you have the former MSU Track and Cross Country star Renee. She is now a science teacher at my old high school. Her husband is in seminary and is working part time as a youth minister. They just had their first child. She too has a blog. It is amazing and encouraging. I urge you to check it out here. There is also a pair of foreign guys who always wear scarves and can be identified by their strong and liberal usage of cologne, a few 20-something-year-olds playing World of Warcraft, and a guy who sits outside and leeches off of the store's Wi-Fi. And last but not least you have Forrest. Forrest was my French professor last summer. He is currently working on his PhD while teaching both French and Spanish at MSU. I swear, whichever coffee shop I go to, Forrest is usually there. I'm beginning to wonder if he is omnipresent. I hear him downstairs right now as I am writing this in the loft of another coffee shop, StrangeBrew.

I've gotten to know Forrest quite well in the past months talking to him at all the different coffee shops. He is a very delightful fellow. Today I was talking to him and as I got up to leave, he stopped me and said "Look man, I know I was your teacher and all, but you have taught me a lot. I’ve learned a lot from you." This kind of took me by surprise. We have discussed many things: from alcohol, his thesis, my job search, to things like theology and God. Who knows which one of those he learned from, but regardless, it is always nice to know that God can use you to have an impact on people. He went on to say: "I know your life isn't that clear right now, what with the job search and all, but I know that there is one out there for you. Maybe its just not ready for you yet, like its not opened, or things just haven't lined up yet. So don't worry." I told him that he is exactly right. God has a place for me, and His timing is perfect, Im just so doggone impatient. I explained that for some unknown reason, God has me still here in Starkville. I jokingly suggested that maybe God wants me to just talk to people in coffee shops for months on end. Forrest chimed in, "Have you ever thought that maybe you're here for just ONE person? I don't mean all the scores of guys you meet with in here, but just ONE person?" I paused and thought about it. That thought has crossed my mind from time to time. I told him that he might be onto something there. If the Lord wanted here all these months to talk to people, if something I said was able to help one person, or share God's truth with one person, or encourage one person, that would be worth it. If the Lord could use me to change one person's life, then all this waiting would totally be worth it. It reminded me of several verses.

"Therefore encourage one another and build each other up, just as in fact you are doing."
-1 Thessalonians 5:11

"And we urge you, brothers and sisters, warn those who are idle and disruptive, encourage the disheartened, help the weak, be patient with everyone."
-Thessalonians 5:14

"And let us consider how to stir up one another to love and good works, not neglecting to meet together, as is the habit of some, but encouraging one another, and all the more as you see the Day drawing near."
-Hebrews 10:24-25

"Anxiety in a man's heart weighs him down, but a good word makes him glad."
-Proverbs 12:25

"Iron sharpens iron, and one man sharpens another."
-Proverbs 27:17

Encouragement. That’s pretty much what the Christian Life is all about. Building up one another, helping those in need, sharing the good news of Christ with those who do not know. And as Forrest suggested, if I was stuck here in Starkville for all these months for the purpose of encouraging just ONE person, that would be totally worth it. We don’t always know what God is doing while we are waiting on Him. The best thing to do is to continue to trust Him. Until God opens the next door, praise Him in the hallway. I have no doubt that the Lord used Forrest to speak those words of encouragement to me, it was exactly what I needed to hear today.

A Bad New Year's Eve Turned Around By The Lord

So, my New Year's Eve had me kind of down.
This past month I had done two rounds of interviews about a marketing job with an amazing local non-profit Christian ministry. The people told me they were very impressed with me and were planning to make a decision soon. For 2 weeks I checked my email several times an hour. Waiting and praying. Then on New Year's Eve I got a letter from them telling me that I didn't get the job I was hoping for. I was disappointed and let down. But I reminded myself that it was an answered prayer. Before I did each interview I prayed "Lord, if this is where you want me to be, open the door. But, if this isn't where you want me to be, slam the door in my face. I don't want to be anywhere unless it's where you want me to be."
This was an answered prayer, not the answer I was hoping for, but an answer nonetheless.
Later in the evening I was at a New Year's Eve party at my buddy Michael's house. I got my phone out and opened the Facebook app to show him something and the first thing I see is that a girl I went out with both semesters of my senior year of college was engaged.
I hadn't thought about her in a while and I knew God didn't intended for us to work out, but it still upset me. After 2 semesters of going out, I approached her and wanted to make it official(meaning that we would call each other boyfriend and girlfriend). She said that she had been prayin about this and she felt like she didn't need to date or have anything official because she was still hurt from a previous relationship and needed time to focus on her relationship with God. She said that she didn't want to say that we would never work out, but that the timing just wasn't right. I too had been praying about it and I was at peace with this, and I respected her response. How can I not respect someone wanting to work on their relationship with the Lord?
The Lord gave me peace over the whole thing and I was able to move on without any problems. Well, 2 months after the conversation I had with her, I found out that she was dating a guy. It was on Facebook, therefore, it was official. Even though I was over her and was at peace with how it ended, when I saw this, I couldn't help but feel hurt and lied to. She had just cooked up that excuse so she didn't have to tell me that she just wasn't interested in me, despite the fact that we went on over a dozen dates where I paid for everything and occasionally bought her gifts out of the blue. (Gifts are my love language). She used that "God card" to avoid telling me the truth. I was ticked off that she did that. But I had already moved on and said "good riddance".
But yesterday I found out that she is engaged to the guy. That just brought back some bad feelings.
Yeah, I know, this sounds like a sad list of complaints, but hang in there! It gets better!
That night the devil was putting thoughts into my head like: "you graduated 8 months ago & you still haven't found a job. A lot of the other people you graduated with have jobs, you'll never find one." And thought like: "you've been 4 years without an official girlfriend and out of the two girls you've dated, one is married and the other is engaged now. Face it, nobody likes you. Nobody ever has. Girls have given you nothing but lies and pain. Most of your friends are either in serious relationships, engaged, or married, but you're still single. Time is running out for you!"
Needless to say, I was feeling pretty lousy. I left the party early so I could be with my family to bring in the New Year.  As I was driving home I started praying to the Lord asking for guidance and peace and for me to remain hopeful and confident in His plans for a job and a wife. I prayed for Him to help restore joy to my life, and for me to delight in Him rather than other people.
After I finished praying I turned up the volume on my radio and heard these lyrics:
"So when youre on your knees and answers seem so far away

And not a tear is wastedIn time, youll understandIm painting beauty with the ashesYour life is in My hands."

When I heard these beautiful lyrics by the band "Casting Crowns" I just smiled and said "really God?!" And I started laughing. He heard me, and that was His response to me.

God is good. He is with you even when you feel alone. He wants us to always be seeking Him. He wants a close father/child relationship with us. It doesn't matter how far we've run away or what we've done, His loving and welcoming arms are always wide open to us....waiting.