Could it really be that simple? 'National Treasure' and The Gospel 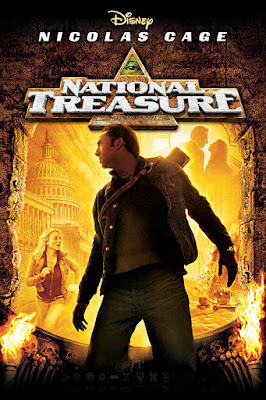 This afternoon I was watching National Treasure, a great patriotic film, with my family. At the beginning we witness a conversation between a young boy and his grandfather. The grandfather tells him that their family has been seeking a hidden treasure. They only have one clue - the phrase "The secret lies with Charlotte" - was entrusted to the family by Charles Carroll of Carrollton (my ancestor by the way) in 1832, and would lead to the fabled "national treasure", a wealth of artifacts dating from Ancient Egypt and secretly hidden by the Founding Fathers and the Freemasons during the American Revolutionary War.

The film then flashes to present day and the young boy is now grown up. Ben Gates, played by Nicholas Cage, has continued the family tradition of searching for the treasure. He discovers that the "Charlotte" is a colonial ship buried beneath the Arctic ice. Once inside the ship he finds an old Meerschaum pipe that is carved in the image of a boat. This is a clue that leads to another clue that leads to another clue and so on and so forth.

At the end of the film they seem to be stumped, all spirits are lost , Ben believes that this treasure quest which has consumed generations of his family, was all a hoax. He walks up to a wall in an underground passage way and finds a notch which the pipe from the Charlotte fits. Ben pauses, thinking aloud he says, "Could it really be that simple?". He puts the pipe into the notch and the wall opens up into a large chamber containing the national treasure.

The entire movie, he had the key to the treasure with him. What Charles Carroll told his great great grandfather, "The secret lies with Charlotte" was the truth. The secret to finding the treasure was in the boat, it was the pipe carved in the shape of the boat. He spent all that time looking but he had it all along. It really was that simple.

Upon hearing this my mom exclaimed, "There it is! Just like the gospel! Salvation really is that simple!"I paused and thought about it for a moment. She was right. The gospel is so simple, and yet so many people try to complicate it.

John 1:11-12 tells us "He came to that which was his own, but his own did not receive him. Yet to all who did receive him, to those who believed in his name, he gave the right to become children of God"

John 3:16 says, "For God so loved the world that he gave his one and only Son, that whoever believes in him shall not perish but have eternal life."

John 3:36 says, "Whoever believes in the Son has eternal life, but whoever rejects the Son will not see life, for God’s wrath remains on them."

In John 5:24, Jesus states, "Very truly I tell you, whoever hears my word and believes him who sent me has eternal life and will not be judged but has crossed over from death to life."

John 6:28-29 says, "Then they asked him, “What must we do to do the works God requires?”Jesus answered, “The work of God is this: to believe in the one he has sent.”

In John 7:37-38, Jesus says “Let anyone who is thirsty come to me and drink. Whoever believes in me, as Scripture has said, rivers of living water will flow from within them.”

Jesus says in John 10:9, "I am the gate; whoever enters through me will be saved."

And one of the most straightforward passages is Acts 16:30-31. In that passage the Jailer asks Paul and Silas “Sirs, what must I do to be saved?” they replied, “Believe in the Lord Jesus, and you will be saved!"

Many churches and pastors and authors in America today say, "Oh, it isn't that simple! There has to be a commitment, good works, turning from sin, baptism, etc..." All those things are great things, and as believers we SHOULD do them. That is part of our sanctification/ our Christian life (becoming more and more like Christ) that should happen after we have believed, but none of those good works have anything to do with our salvation. If you look at scripture, it is abundantly clear that the sole requirement for salvation is by God's grace alone through faith alone in Christ alone (Ephesians 2:8-9). Grace means an undeserved or unmerited FREE gift. No action we do can be a part of it. It is God's gift given freely to us by his grace. Do we deserve it? No! Do we work for it? No! If we did, it wouldn't be grace.

Sin separated us from God. He required perfection for us to have everlasting life with Him, but we have all fallen shot of that mark. He sent His son, Christ to live a sinless life and take the punishment for our sins. All the sins of the world, past, present, and future were paid for on the cross. Sin is no longer the problem, it is no longer what separates us from God. Sin has been paid for. What separates us from God is our lack of faith. He offers us the free gift of everlasting life with Him if we simply believe in Him for salvation.


"Could it really be that simple?"

BELIEVE in the Lord Jesus and you will be saved! Then, once you have believed, receiving God's free gift of everlasting life, we are free to serve Him and live our lives to glorify Him. He did the unthinkable and the impossible for us. We should be thankful, we should show our thankfulness to Him by serving Him, not because we have to, but because we want to! "We love him, because he first loved us." (1 John 4:19).